This past week, I had a great opportunity to be with golf legend Arnold Palmer.  This was not our first meeting; indeed, we have spoken on many occasions through the years, mostly on a golf course, but not always. This week's blog is about Lessons the Bunny Teacher Learned from Arnold Palmer.

The WPIAL Boys' Individual Finals were held at Latrobe Country Club on October 2, and Mr. Arnold Palmer  was to make a guest appearance before the tournament and provide a photo opportunity for all of the players and the WPIAL Golf Committee, of which I am a member. People over the age of 50 know about the contributions Arnold Palmer has made to the golf world; the young people know the Arnold Palmer drink in a can. What everyone was to find out is this:  Arnold Palmer is a man who honors his commitments.

Mr. Palmer arrived, and he looked so sick.  Turns out, he was not only sick, he stopped off at the course on the way to see his doctor.  Why did he come to the course when he was ill?  He told the players he would.  Simple, honest, and true, his Western Pennsylvania values superseded his illness. Near the close of the competition, he even came back! (Looking and feeling better, I should add, after an adjustment to his new pacemaker, he told me.)   He was his affable self, shaking hands and allowing photos with anyone who asked.  When a playoff ensued, he drove out to watch the drama and congratulated the winner, remembering the times when he was the WPIAL Champion in both 1946 and 1947.

I had the chance to spend more than an hour with Arnold Palmer, my favorite golfer.  I told him that when I was a little girl (and the Steelers were terrible), Daddy and I would sit in the same overstuffed chair (we were both painfully thin) and watch golf.  Daddy would say "That Arnold Palmer is going to change golf.  He makes it fun and exciting, and it won't be just a rich man's game anymore."  (Daddy was right.  Arnold Palmer did change the face of golf forever, and his legions of fans know that he is the man behind the exponential growth of the game all those years ago.)  I shared this story with Arnie, and he looked at me with such seriousness and such humility, then looked down, almost embarrassed, and said "Thank you."

Arnold Palmer is one of the most successful businessmen who ever lived.  His name sells everything from cars to drinks to memberships in the USGA. Yet, he is a very real person. We discussed many topics,  from my late husband's death from cancer (I cried because of the empathy he showed me as he patted my hand, remembering the loss of his wife, Winnie) to the importance of coaches in young people's lives. We talked about his grandsons (I know both) and about pacemakers (Daddy had one.) We walked down memory lane as I shared that I walked outside the ropes with him on 18 at Oakmont in 1994, his last US Open, and that I cried every step of the hole.  He humbly looked down and murmured a low "Thank you."

But this piece is about neither adoration nor adulation. Arnold Palmer is simply a man who never forgot his roots and his core values.  He is successful because he worked hard his entire life, and he continues to work several days a week, even at age 85. His philanthropy is legendary, with medical centers and wings from the Arnold Palmer Hospital for Children in Orlando to the Arnold Palmer Pavilion at the UPMC in Pittsburgh to the Winnie Palmer Hospital for Women and Babies and the Arnold Palmer Prostate Center in California. He is the spokesperson for the USGA, and the "King" of the Golf Channel, as well as the designer of worldwide and world class golf courses.  Yet, Arnold Palmer still lives in Latrobe, and continues to make his hometown better, through his support of the Latrobe Excela  Hospital and the Winnie Palmer Nature Reserve near St. Vincent College in Latrobe, just to name a few.

I had a great day with Arnold Palmer.  With all of his accomplishments, he was interested in me, as both a person and as a coach.  He thanked me for my 33 years of service to the youth of North Allegheny as a coach.  Very humbling, I will say, and a day I will never forget.

Arnold Palmer confirmed what I already knew about him as a person, and what I would like to share with you.  It is important to remember your roots.  Those are the people who liked you before you were famous.  Giving back is the way to go.  No need for fanfare, just do things quietly, and make the lives of others better, just because you can. Appreciate what you have. Humility is key.  Remember who you are and where you came from.  Be yourself.  Don't let the adulation of millions of people change your persona. They like you for who you are, so why change?  Don't let success go to your head.  If you are good at something, share it with others.  Arnold Palmer has taught countless others to play the game (including his grandsons.) Remember the lessons your father taught you, as they will serve you well for the rest of your life.  Here is the link to a recent and short video in which Arnie remembers his childhood lessons:
http://www.golfchannel.com/media/palmer-reflects-lessons-learned-his-father/

There will never be another Arnold Palmer.  The word GOLF is synonymous with his name.  His passion made the game exciting and fun and available to everyone on a world stage.  His charity and compassion for others exceeds that of any other athlete, which is why he received the Congressional Gold Medal  in 2012, one of only six athletes to receive this honor.

Thank you, Arnold Palmer, for being you, and for teaching all of us what success, grace, and humility really mean.  You are a national treasure who just happens to be from Latrobe.  And one more time, I will say what I have always said to you every time we have met through these many decades and years :  "I still love you, Arnie."  And your answer (with the twinkle in your eyes) is always the same:  "I know, honey. you told me last time."

The most rewarding things you do in life are often the ones that look like they cannot be done. 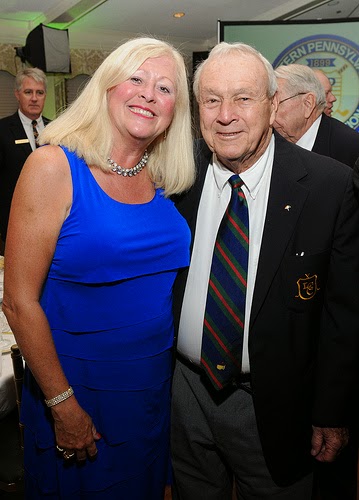